Patrick Lencioni stated in his book The five dysfunctions of a team: “Teamwork is the ultimate competitive advantage”. Ineffective collaboration can destroy any endeavour. But what makes (agile) teams successful? How do you manage to create a really great team?

Different articles and books tried to provide answers to these questions. In the context of team building and team development, the following studies and books shaped our thinking and give some interesting thoughts.

1.      Primed to perform – how to build the highest performing cultures through the science of total motivation

Do you want to know how to build a great culture and sustain it over time? Neel Doshi and Lindsay McGregor’s revolutionary book teaches you how to use the cutting edge of human psychology to build high performing workplace cultures. Most people believe that culture is critical to success, but few know how to build and sustain it over time. Doshi and McGregor show in their book Primed to Perform how to do that using a systematic and sustainable approach. Thereby, they identified a spectrum of reasons why people perform an activity. The first three motives, play, purpose and potential, are directly linked to the work activities and drive performance. Moving further along the motive spectrum, they are no longer linked to the work itself. These so-called indirect motives, namely economic pressure, emotional pressure and inertia, frequently harm performance.

Patrick Lencioni (2002) used a different approach to point out how a team can become successful. He argued in his leadership fable that all teams tend to be dysfunctional and outlined a powerful model and actionable steps to overcome these hurdles, as well as become a committed, effective team. The model contains five levels of dysfunctions building upon each other, meaning that the eliminationof the dysfunctions should be carried out from the bottom up.

The first dysfunction ‘absence of trust’ emphasizes the importance of “a certain comfort level among team members”, while the second dysfunction ‘fear of conflict’ addresses the necessity of “passionate debate about key issues”. The third and fourth dysfunction levels highlight the role of commitment and responsibility within a team, where as the final level concerns the danger of losing “sight of the need for achievement”.

3.      Drive – The surprising truth about what motivates us

Forget everything you thought you knew about how to motivate people – it is wrong: Daniel Pink claims there are only three core elements that motivate us, ‘autonomy’, ‘mastery’ and ‘purpose’. The secret to high performance and satisfaction is the deeply human need to do better by ourselves and our world, to learn and create new things (mastery), to direct our own lives (autonomy) and to do what we do inthe service to something larger than ourselves (purpose). “If you want engagement, self-direction works better”!

This interesting research by Google defined the five keys to successful team work as ‘psychological safety’, ‘dependability’, ‘structure and clarity’, ‘meaning of work’ and ‘impact of work’. If you boast a high level of each of the five factors in your team, you are probably on a highly effective team. The five keys help teams to figure out where to focus and how to get better and talk about it.

·        Psychological safety: can we take risks on this team without feeling insecure or embarrassed?

·        Dependability: can we count on each other to do high quality work on time?

·        Meaning of work: are we working on something that is personally important for each of us?

·        Impact of work: do we fundamentally believe that the work we’re doing matters?

Katzenbach and Smith presented a team effectiveness model in the form of a triangle. The main results of teamwork are displayed at the corners: collective work products, performance results and personal growth. The sides are the key factors contributing to the achievement of these objectives: commitment to common goals, skills that complement one another and accountability – all team member shold each other accountable for their work.

6.      GRPI model – Based on the book “task oriented team development”

Richard Beckard outlines four interrelated components of highly effective teamwork: ‘goals’, ‘roles’, ‘processes’ and ‘interpersonal relationships’. The components are arranged in a hierarchical order, meaning that success in one of the aspects leads to the rise of a new challenge. Having set clear team goals and being committed to them, a team needs to move on by clarifying roles and processes, which then lead to the development of beneficial relationships between team members. Once a team has ensured that all those requirements are met, it can be effective.

Bruce Tuckman (1965) describes in his research on development sequence in small groups four principal stages that every team goes through: Forming, Storming, Norming, Performing. It is helpful to know the typical stages any team will go through and to understand how to support the teams through each stage. In 1977 Tuckmanadded the fifth stage – adjourning – to the model, which occurs when the team accomplishes a project.

None of the existing team development models in the literature will provide a recipe for creating an outstanding (agile) team. However, they all contribute to a better understanding of factors that define social dynamics in teams and motivate human beings to engage in change. They all in a way contributed to our key success factors model of team fulfilment. Our framework provides a holistic approach to create a shared understanding of teamwork and team effectiveness and make the key success factors quantifiable. In doing so, our model helps teams to identify specific core factors that may be lacking so the teams can focus on improving them.

Coping with the “New Normal” as a Scrum Organization
Nowadays, it is the teams that shape a company.
High-performance teams – the success for the future! 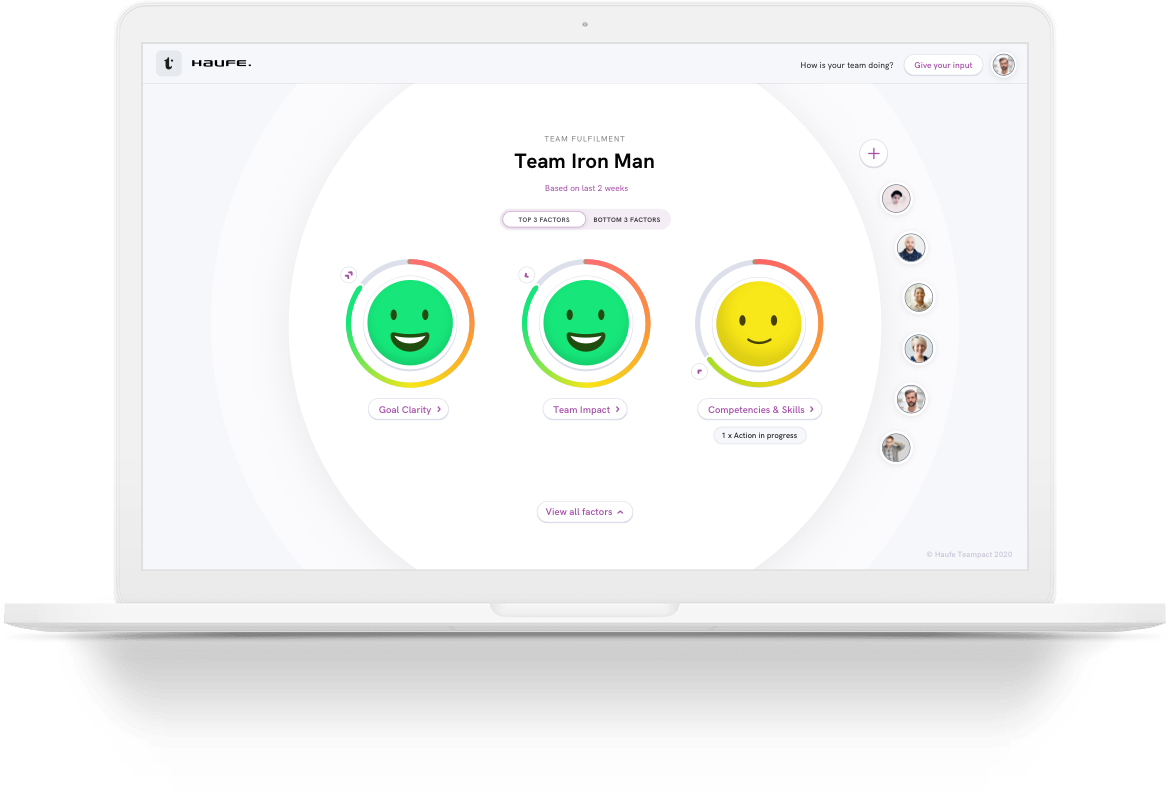 Ready to boost your impact?

Be one of the first to use Teampact Open Beta. Tap into your teams' full potential and continuously improve your team with tailored recommendations.